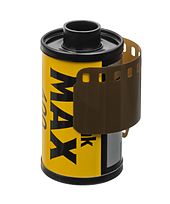 A roll of Kodak 35 mm film for cameras.

The 35 mm format, or simply 35 mm, is the common name for the 36×24 mm film format or image sensor format used in photography. It has an aspect ratio of 3:2, and a diagonal measurement of approximately 43 mm. It has been employed in countless photographic applications including single-lens reflex (SLR) cameras, rangefinder cameras (film and digital), mirrorless interchangeable-lens digital cameras, digital SLRs, point-and-shoot film cameras, and disposable film cameras.

The format originated with Oskar Barnack and his introduction of the Leica camera in the 1920s.[1] Thus it is sometimes called the Leica format[2] or Barnack format.[3] The name 35 mm originates with the total width of the 135 film, the perforated cartridge film which was the primary medium of the format prior to the invention of the full frame DSLR. The term 135 format remains in use. In digital photography, the format has come to be known as full frame, FF or FX, the latter invented as a trade mark of Nikon. Historically, the 35 mm format was sometimes called miniature format[4] or small format,[5] terms meant to distinguish it from medium format and large format.

The 35 mm format was conceived by Oskar Barnack by doubling the size of the 24×18 mm format used in cinema.[1] Cameras have come a long way, from photographers carrying around heavy plate cameras to a more compact 35 mm camera that could be used professionally or recreationally. Before, taking photographs was not as readily available for everyone as it is now. Now, photographers can easily take photos anywhere around the world. Being able to have a compact camera opens a whole new door for photography. 35 mm film was created when William Kennedy Laurie Dickson sliced in half 70 mm Kodak film then spliced the ends together. It became most popular between the years of 1905-1913 and was starting to be used for still photography. In 1913, 35 mm film became more readily available to the public and increased the sales of cameras like the Tourist Multiple and Simplex.

Use in still photographic film cameras

Use in digital cameras

Digital sensors are available in various sizes. Professional DSLR cameras usually use digital image sensors approximate the dimensions of the 35 mm format, sometimes differing by fractions of a millimeter on one or both dimensions. Since 2007, Nikon has referred to their 35 mm format by the trade mark FX. Other makers of 35 mm format digital cameras, including Leica, Sony, and Canon, refer to their 35 mm sensors simply as full frame.

A true normal lens for 35 mm format would have a focal length of 43 mm, the diagonal measurement of the format. However, lenses of 43 mm to 60 mm are commonly considered normal lenses for the format, in mass production and popular use. Common focal lengths of lenses made for the format include 24, 28, 35, 50, 85, 105, and 135 mm. Most commonly, a 50 mm lens is the one considered normal; any lens shorter than this is considered a wide angle lens and anything above is considered a telephoto lens. Even then, wide angles shorter than 24 mm is called an extreme wide angle. Lenses above 50 mm but up to about 100 mm are called short telephoto or sometimes, as portrait telephotos, from 100 mm to about 200 mm are called medium telephotos, and above 300 mm are called long telephotos.

Some of the most popular aspects about 35 mm film and why new hobbyist and long time professional photographers alike love the film process is due to the combination of science and mystery involved. Unlike digital photography, you are unable to instantaneously view the image you have taken like you can with digital photography, leaving you in suspense as you wait for your film to be developed. The development process is another key factor separating analogue from digital. Only through this process are you able to view the image that was taken, leaving room for even more creative abilities depending how you develop your film. Typically you would have to send in your film into a professional development lab. But now due to the resurgence of film, personal household development kits are available. They are so convenient that large dark rooms are no longer required.

This was the first commercially available leica 35 mm camera designed by Oscar Barnack. It was popularized and further developed the advancement of film photography. The first of these was lacking something you would call a rangefinder. The lens was not replaceable. However, the camera is now fitted with a focal-plane shutter with speeds from 1/20 to 1/500th of a second.

This eventually became the basis for all subsequent film cameras for the next 30 years. From this, the camera has evolved to fit many needs that include but are not limited to: aerial photography, underwater photography, etc.

Many photographers think about angle of view in terms of 35 mm format lenses, due to the historic prevalence of the 35 mm format. For example, a photographer might associate a 50 mm focal length with a normal perspective, because a 50 mm lens produces that perspective on this format. With many smaller formats now common (such as APS-C), lenses may be advertised or marked with their "35 mm equivalent" or "full-frame equivalent" focal length as a mnemonic. This 'equivalent' is computed by multiplying (a) the true focal length of the lens by (b) the ratio of the diagonal measurement of the native format to that of the 35 mm format.