David Bailey was born at Whipps Cross University Hospital in Leytonstone,[3] to Herbert Bailey, a tailor's cutter, and his wife, Gladys a machinist. From the age of three he lived in East Ham.[4]

Bailey developed a love of natural history, and this led him into photography. Suffering from undiagnosed dyslexia,[5] he experienced problems at school. He attended a private school, Clark's College in Ilford, where he says they taught him less than the more basic council school. As well as dyslexia he also has the motor skill disorder dyspraxia (developmental coordination disorder).[5]

In one school year, he claims he only attended 33 times.[4] He left school on his fifteenth birthday, to become a copy boy at the Fleet Street offices of the Yorkshire Post. He raced through a series of dead end jobs, before his call up for National Service in 1956, serving with the Royal Air Force in Singapore in 1957. The appropriation of his trumpet forced him to consider other creative outlets, and he bought a Rolleiflex camera.

He was demobbed in August 1958, and determined to pursue a career in photography, he bought a Canon rangefinder camera. Unable to obtain a place at the London College of Printing because of his school record, he became a second assistant to , in Charlotte Mews. He earned £3 10s (£3.50) a week, and acted as studio dogsbody. He was delighted to be called to an interview with photographer John French.[citation needed] 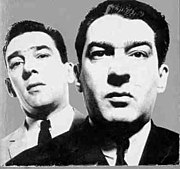 One of Bailey's images of London gangsters Ronnie and Reggie Kray

In 1959, Bailey became a photographic assistant at the John French studio, and in May 1960, he was a photographer for John Cole's Studio Five, before being contracted as a fashion photographer for British Vogue magazine later that year.[6] He also undertook a large amount of freelance work.[7]

Along with Terence Donovan and Brian Duffy, Bailey captured and helped create the 'Swinging London' of the 1960s: a culture of fashion and celebrity chic. The three photographers socialised with actors, musicians and royalty, and found themselves elevated to celebrity status. Together, they were the first real celebrity photographers, named by Norman Parkinson "the Black Trinity".[8]

The film Blowup (1966), directed by Michelangelo Antonioni, depicts the life of a London fashion photographer who is played by David Hemmings, whose character was inspired by Bailey.[9] The "Swinging London" scene was aptly reflected in his Box of Pin-Ups (1964): a box of poster-prints of 1960s celebrities including Terence Stamp, The Beatles, Mick Jagger, Jean Shrimpton, PJ Proby, Cecil Beaton, Rudolf Nureyev and East End gangsters, the Kray twins. The Box was an unusual and unique commercial release. It reflected the changing status of the photographer that one could sell a collection of prints in this way. Strong objection to the presence of the Krays by fellow photographer, Lord Snowdon, was the major reason no American edition of the "Box" was released, and that a second British edition was not issued. The record sale for a copy of 'Box of Pin-Ups' is reported as "north of £20,000".[10]

At Vogue Bailey was shooting covers within months, and, at the height of his productivity, he shot 800 pages of Vogue editorial in one year.[11] Penelope Tree, a former girlfriend, described him as "the king lion on the Savannah: incredibly attractive, with a dangerous vibe. He was the electricity, the brightest, most powerful, most talented, most energetic force at the magazine".[11]

American Vogue's creative director Grace Coddington, then a model herself, said "It was the Sixties, it was a raving time, and Bailey was unbelievably good-looking. He was everything that you wanted him to be – like the Beatles but accessible – and when he went on the market everyone went in. We were all killing ourselves to be his model, although he hooked up with Jean Shrimpton pretty quickly".[11]

She was magic and the camera loved her too. In a way she was the cheapest model in the world – you only needed to shoot half a roll of film and then you had it. She had the knack of having her hand in the right place, she knew where the light was, she was just a natural.[7]

Since 1966, Bailey has also directed several television commercials and documentaries. From 1968 to 1971 he directed and produced TV documentaries titled Beaton, Warhol and Visconti. As well as fashion photography, Bailey photographed album sleeve art for musicians including The Rolling Stones and Marianne Faithfull. One of Bailey's most famous works depicts the Rolling Stones including Brian Jones, who drowned in 1969 while under the influence of drink and drugs. He is seen standing slightly apart from the rest of the group.[7]

Bailey was hired in 1970 by Island Records' Chris Blackwell to shoot publicity photos of Cat Stevens for his upcoming album Tea for the Tillerman. Stevens, who is now known as Yusuf Islam maintains that he disliked having his photo on the cover of his albums, as had previously been the case, although he allowed Bailey's photographs to be placed on the inner sleeve of the album.[12]

In 1972, rock singer Alice Cooper was photographed by Bailey for Vogue magazine, almost naked apart from a snake. Cooper used Bailey the following year to shoot for the group's chart topping 'Billion Dollar Babies' album. The shoot included a baby wearing shocking eye makeup and, supposedly, one billion dollars in cash requiring the shoot to be under armed guard. In 1976, Bailey published Ritz Newspaper together with David Litchfield. In 1985, Bailey was photographing stars at the Live Aid concert at Wembley Stadium. As he recalled later: "The atmosphere on the day was great. At one point I got a tap on my shoulder and spun round. Suddenly there was a big tongue down my throat! It was Freddie Mercury."[13]

In 1992, Bailey directed the BBC drama Who Dealt? starring Juliet Stevenson, story by Ring Lardner. In 1995 he directed and wrote the South Bank Film The Lady is a Tramp featuring his wife Catherine Bailey. In 1998 he directed a documentary with Ginger Television Production, Models Close Up, commissioned by Channel 4 Television.[14]

In 2012, the BBC made a film of the story of his 1962 New York photoshoot with Jean Shrimpton, entitled We'll Take Manhattan, starring Aneurin Barnard as Bailey.[citation needed]

In October 2013, Bailey took part in Art Wars at the Saatchi Gallery curated by Ben Moore.[15] The artist was issued with a stormtrooper helmet, which he transformed into a work of art.[15] Proceeds went to the Missing Tom Fund set up by Ben Moore to find his brother Tom who has been missing for over ten years.[15] The work was also shown on the Regents Park platform as part of Art Below Regents Park.[16]

In October 2020 Bailey's Memoir "Look Again" in co-operation with author James Fox was published by Macmillan Books a review on his life and work.[18]

Bailey began working with fashion brand Jaeger in the late 1950s when Jean Muir landed the role of designer. After working alongside other fashion photographers such as the late Norman Parkinson, Bailey was officially commissioned by Vogue in 1962.[19]

His first shoot in New York City was of young model Jean Shrimpton, who wore a range of Jaeger and Susan Small clothing, including a camel suit with a green blouse and a suede coat worn with kitten heels. The shoot was titled 'Young Idea Goes West'.

After 53 years Bailey returned to Jaeger to shoot their AW15 campaign.[20] As menswear subject; James Penfold modelled tailored tweed blazers and a camel coat. Also on the shoot was model, philanthropist and film director Elisa Sednaoui along with GQ magazine's most stylish male 2003, Martin Gardner. 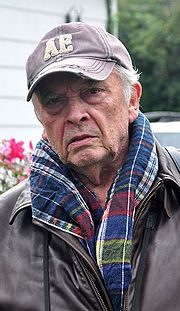 In the 1970s Bailey lost some equipment in a robbery and replaced it with the new Olympus OM system equipment which was substantially smaller and lighter than contemporary competitors' equipment. He then appeared in advertising promoting the Olympus OM-1 35 mm single lens reflex camera. He subsequently appeared in a series of UK TV commercials for the Olympus Trip camera.[26][citation needed]

Bailey has been married four times: in 1960 to Rosemary Bramble; in 1965 to the actress Catherine Deneuve (divorced 1972); in 1975 to American fashion model and writer Marie Helvin; and in 1986 to the model Catherine Dyer (born 20 July 1961), to whom he remains married. He is a long-time vegetarian and refrains from drinking alcohol. An art-lover with a long-held passion for the works of Picasso, his Company address is in London and his wife is listed as a Director under her married name Catherine Caliope Bailey, together with their photographer son Fenton Fox Bailey.[27][28] The family maintain a home on Dartmoor, near Plymouth.[29] His youngest son b.June 1994 Sascha Taday Bailey, is an art curator.