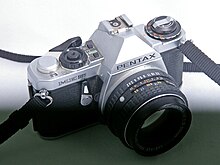 An example of improper synch. Either the flash is firing too late or the shutter speed is too fast (shutter moving vertically). Note the different exposure levels. 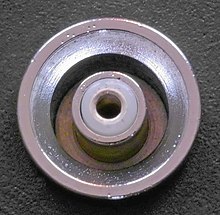 In cameras with mechanical (clockwork) shutters synchronization is supported by an electrical contact within the shutter mechanism, which closes the circuit at the appropriate moment in the shutter opening process. In electronic digital cameras, the mechanism is usually a programmable electronic timing circuit, which may, in some cameras, take input from a mechanical shutter contact. The flash is connected electrically to the camera either by a cable with a standardised coaxial PC (for Prontor/Compur) 3.5 mm (1/8") connector[1] (as defined in ISO 519[2]), or via contacts in an accessory mount (hot shoe) bracket.

Faster shutter speeds are often better when there is significant ambient illumination, and flash is used to flash fill subjects that are backlit without motion blur, or to increase depth of field by using a small aperture. In another creative use, the photographer of a moving subject may deliberately combine a slow shutter speed with flash exposure in order to record motion blur of the ambient-lit regions of the image superimposed on the flash-lit regions.

The photometric output of the GE Synchro-Press No. 11 flashbulb is shown here. Like all "M" bulbs, its peak output was defined as occurring 20 milliseconds after applying electrical current. The No. 11 had a peak luminous flux of 1.8 million lumens. Its rated luminous energy, Qv of 23,000 lumen⋅seconds is the shaded area to the right of the definitional shutter opening point (1/800 th of a second before the point of peak luminous flux).

X-sync is the simplest to explain and implement: the flash is fired at the instant the shutter is fully open. Electronic flash equipment produces a very short flash.

Cameras designed for use with flash bulbs generally had one or more of S (slow) sync, M (medium) sync, F (fast) sync, or FP/FPX (flat peak) sync, designed for use with corresponding bulb types. These sync modes close the contacts a few milliseconds before the shutter is open, to give the flashbulb time to reach peak brightness before exposing the film. Class M bulbs reach their peak illumination 20 milliseconds after ignition, and class F lamps reach their peak at approximately 5 milliseconds.[3] Most standard flash bulbs used M sync. X sync closes the flash contact just as the shutter blades are almost completely open.

Cameras with sync speeds for S, M, and F had delays designed so any given camera's fastest shutter speed would be centered at the point of peak intensity for any of the three given delay classes of bulbs. This maximized the guide number at the fastest shutter speeds since errors of even several milliseconds would cause significant underexposures. As illustrated in the graph at right for the General Electric Synchro-Flash No. 11, which was an "M" class bulb (20 ms delay to peak by design), a leaf shutter-type camera with a top shutter speed of 1/400 th of a second would open its shutter 19 milliseconds after electrical current was applied to the bulb.

The Nikon F offered FP, M, and ME bulb synchronizations, in addition to the X sync.[4]

X (xenon) sync is a mode designed for use with electronic flash.[5] In this mode, the timing of the contacts coincides exactly with the full opening of the shutter, since xenon flashes respond almost instantly.

Due to their construction, focal plane shutters, as used on most SLRs, only allow normal xenon flash units to be used at shutter speeds slow enough that the entire shutter is open at once, typically at shutter speeds of 1/60 or slower, although some modern cameras may have an X-sync speed as high as 1/500 (e.g. Nikon's D40 DSLRs). Special electronic flash units for focal-plane shutters fire several times as the slit moves across the film. Electronic shutters used in some digital cameras do not have this limitation and may allow a very high X-sync speed.

Leaf shutters, which are generally situated within the lens housing, open to expose the entire image at once, and therefore allow flash sync across all shutter speeds (up to 1/1600" with a Schneider Kreuznach lens on a Phase One/Mamiya 645DF camera).

Higher sync speeds are useful as they allow ambient light to be controlled by increasing shutter speed rather than reducing aperture. This enables the same ambient light exposure at a larger aperture; this larger aperture in turn reduces the amount of flash output necessary to illuminate a subject.

Today, certain modern xenon flash units have the ability to produce a longer-duration flash to permit flash synchronization at shorter shutter speeds, therefore called high-speed sync (HSS). Instead of delivering one burst of light, the units deliver several smaller bursts over a time interval as short as 1/125 of a second. This allows light to be delivered to the entire area of the film or image sensor even though the shutter is never fully open at any moment, similar to FP sync. The downside is that the flash is of less effective intensity since the individual bursts are lower powered than the normal capability of the flash unit. Only certain camera and flash combinations support this feature, and the camera-flash pairings are almost exclusively from the same manufacturer. Wireless remote flash triggers with these features are becoming more common.

Some modern electronic cameras include the ability to fire the flash just before the closing of the shutter, so that moving objects will show a streak where they came from and a sharp image where they were at the end of the exposure, useful for moving objects to convey a sense of speed. This mode is called either rear-curtain sync or 2nd-curtain sync.

One of the problems with optical triggering is that in modern digital cameras a built-in or shoemount flash releases one or more 'pre-flashes'. Many optical slave units will respond to the pre-flash, thus firing the slave flash too early. Sometimes this can be prevented by setting the camera to manual ('M'). However, a good number of cameras will still fire pre-flashes even on a manual setting. This is equally true for compact cameras as well as the more professional digital SLR cameras. Still, a flash connected to the PC jack on a camera or in the hotshoe will usually not fire pre-flashes in the 'M' setting and therefore can be used to optically trigger a number of slave flashes.

Many compact cameras, however, only have a built-in flash and no hotshoe and no connector for an external flash and there is no way to suppress the pre-flash. In those instances, slave units are used that are able to skip a number of flashes, thus skipping one or more pre-flashes and only firing simultaneously with the main flash firing. Some modern flash units have this capacity built in. An example at the low end is the Godox 18, a simple flash unit that can be set to skip a max of 3 flashes. A more advanced flash that can set to skip one pre-flash is the popular 'strobist' flash, the Lumopro160. Also, some studio flashes can be set to ignore pre-flash.

Rather than selecting a specific number of pre-flashes to ignore, some slave units have a learning mode in which firing one flash teaches them on which flash to synchronise.

Several camera equipment manufacturers have support for remote flash triggering built into at least some of their camera and flash models. This eliminates the issue of slave flashes triggering upon seeing a pre-flash, as the master flash unit (whether a shoemount flash or the camera's pop-up flash) sends predefined signals to the slave units to control them. However, the user is restricted to using flash units from that camera manufacturer, or a limited selection of third-party units which are compatible with it.

To resolve the issues of optical triggering, camera accessory manufacturers (e.g. PocketWizard, Cactus) have developed radio devices to trigger shoemount flashes wirelessly. Radio signals can easily transmit to a longer distance. They would not be wrongly triggered by pre-flashes. The off-camera flashes do not have to be placed in the line of sight with the camera. Comparatively, with radio triggering, photographers have more freedom to locate the off-camera flashes.