Olympus Corporation (オリンパス株式会社, Orinpasu Kabushiki-gaisha) is a Japanese manufacturer of optics and reprography products. Olympus was established on 12 October 1919, initially specializing in microscopes and thermometers.[4] Olympus holds roughly a 70-percent share of the global endoscope market, estimated to be worth approximately US$2.5 billion. Its global headquarters are located in Shinjuku, Tokyo, Japan.

In 2011, Olympus attracted worldwide media scrutiny when it fired its CEO and the matter snowballed into a corporate corruption investigation[5] with multiple arrests.[6] It paid $646 million in kickback fines in 2016.[7]

In 1936, Olympus introduced its first camera, the Semi-Olympus I, fitted with the first Zuiko-branded lens.[8] The Olympus Chrome Six was a series of folding cameras made by Takachiho, and later Olympus, from 1948 to 1956, for 6×4.5 cm or 6×6cm exposures on 120 film.[citation needed]

The first innovative camera series from Olympus was the Pen, launched in 1959. It used a half-frame format, taking 72 18×24 mm photographs on a standard 36-exposure 35mm film cassette,[9] which made Pen cameras compact and portable for their time.[citation needed] 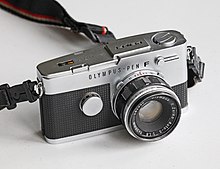 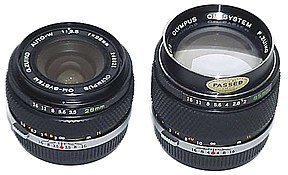 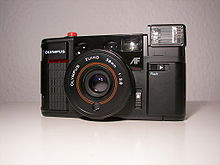 In 1983, Olympus, along with Canon, branded a range of video recording equipment manufactured by JVC,[citation needed] and called it "Olympus Video Photography", even employing renowned photographer Terance Donovan to promote the range.[citation needed] A second version of the system was available the year after, but this was Olympus' last foray into the world of consumer video equipment until digital cameras became popular.[citation needed]

Tsuyoshi Kikukawa, who was later to become president of Olympus, foresaw the demand for the digital SLR, and is credited with the company's strategy in digital photography. He fought for commitment by Olympus to enter the market in high-resolution photographic products. As a result of his efforts, Olympus released an 810,000-pixel digital camera for the mass market in 1996, when the resolution of rivals' offerings was less than half.[10] The next year, Olympus hit the market with a 1.41 million pixel camera. By 2001, the company's annual turnover from digital photography was in excess of ¥100 billion.[10] Olympus manufactures compact digital cameras and is the designer of the Four Thirds system standard for digital single-lens reflex cameras. Olympus' Four-Thirds system flagship DSLR camera is the E-5, released in 2010. Olympus is also the largest manufacturer of Four-Thirds lenses, under the Zuiko Digital brand. After the introduction of the Micro Four Thirds system, and the general market growth of the Mirrorless Interchangeable Lens Cameras, the regular Four Thirds system became neglected. Then, in 2017, after three years without a new lens, and seven years without a new body, Olympus officially discontinued the Four Thirds system[11] 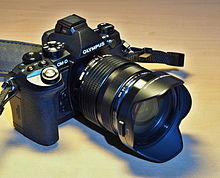 Olympus and Panasonic started a new development together, called the Micro Four Thirds system. It was an interchangeable lens system, with the Four Thirds sensor size, and no mirrors (Mirrorless Interchangeable Lens Camera). The lack of mirrors allowed the camera body to be a lot smaller than that of a DSLR, while maintaining its image quality and the interchangeability of the lenses. The first product in the Micro Four Thirds system was the Panasonic Lumix DMC-G1, released in 2008. The first Olympus-branded MFT camera was the Olympus PEN E-P1. Because it was really expensive, they made a cheaper option, called the Olympus PEN Lite E-PL1. The market growth of the MILC cameras made Olympus introduce a new series in their lineup, which was the modern, digital implementation of the legendary OM series, the OM-D. It maintained the Micro Four Thirds system, but added a built-in electronic viewfinder, a more ergonomic button layout packaged in a retro style chassis. The first model in this family was the E-M5, released in 2012. Since then, Olympus has developed their two lines (PEN and OM-D) and the Micro Four Thirds system, still alongside Panasonic. The latest Olympus camera is the as of August 20, 2020. 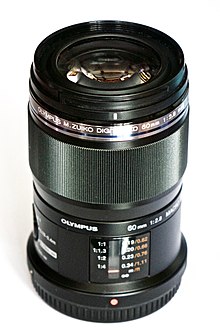 At one time, Olympus cameras used only the proprietary xD-Picture Card for storage media. This storage solution is less popular than more common formats, and recent cameras can use SD and CompactFlash cards. The most recent development is Olympus' focus on the Micro Four Thirds system.[citation needed]

In 2012, the company announced that Sony and Fujifilm had offered forming a capital alliance and the company would focus on Mirrorless interchangeable-lens cameras (MILC).[13]

Olympus manufactures endoscopic, ultrasound, electrocautery, endotherapy, and cleaning and disinfection equipment. The first flexible Endoscope in the world was co-developed and manufactured by Olympus in Tokyo.[17] Through its comprehensive product range and its reactivity to market innovations, Olympus enjoys a virtual stranglehold of the world market in gastro-intestinal endoscopes. It has roughly 70% share of the global market whose estimated valued at US$2.5 billion.[18] On 28 September 2012, Olympus and Sony announced that the two companies will establish a joint venture to develop new surgical endoscopes with 4K resolution (or higher) and 3D capability.[19]

Olympus Scientific Solutions Americas Corporation is a Waltham, Massachusetts-based manufacturer, and is a subsidiary of Olympus Corporation. One of its companies, for example, is Olympus Imaging and Measuring Systems, specializing in imaging instruments for testing and measurement during industrial inspections.[citation needed]

Shareholding in Olympus is dispersed, and the company's key institutional investors are largely passive.[21] As of 31 March 2011, investors included Nippon Life Insurance (8.4%), Bank of Tokyo-Mitsubishi (4.98%), and Sumitomo Mitsui Banking (3.13%), and the Government of Singapore Investment Corporation (2.55%). Foreign institutions and individuals spoke for 27.71% of Olympus shares.[21][22] On 28 September 2012, Olympus and Sony announced that Olympus would receive a 50 billion yen capital injection from Sony. On 22 February 2013, Sony became the largest shareholder (11.46%) of Olympus, later cutting that stake in half during one of its own restructurings, only to sell its entire remaining stake in Olympus, totaling 5% of the company, after a request by activist investor Daniel Loeb to do so, in 2019.[23]

According to its 2011 Annual Report, Olympus was governed by a 15-person board of directors, with Tsuyoshi Kikukawa its President and CEO, and Michael C. Woodford as President and chief operating officer. Mr Kikukawa resigned in the following year and was arrested by Tokyo police for alleged criminal offenses during and before his term as president and CEO. The corporation in 2011 had three "outside directors".[24] It had a four-member 'Board of Auditors' which supervises and audits directors' performance. The company's executive committee consisted of 28 members, responsible for the day-to-day operations.[25]

In 2011, the company attracted worldwide media scrutiny when it fired its newly appointed British chief executive (CEO) Michael Woodford, a 30-year Olympus veteran, for probing into financial irregularities and unexplained payments totaling hundreds of millions of US dollars. Although the board initially dismissed Woodford's concerns via mass media as "disruptive" and Woodford himself as failing to grasp the local culture, the matter quickly snowballed into a corporate corruption[5] scandal concerning alleged concealment of more than ¥117.7 billion ($1.5 billion) in investment losses, kickbacks, and covert payments to criminal organizations dating back as far as the 1980s.[26][27][28][29] One of the longest-lasting accounting scandals in Japanese corporate history,[30] the incident wiped out over three-quarters of the company's valuation[31] and led much of the board to resign in disgrace. Investigations were launched across Japan, the United Kingdom, and the United States, culminating in the arrests of numerous corporate directors, senior managers, auditors, and bankers[6] and raising significant concerns over prevailing standards of corporate governance and transparency,[32] as well as the state of Japanese financial markets. Woodford himself, who stated he had received death threats for his role in exposing the cover-up,[29] was reportedly awarded £10 million ($16 million) in damages for defamation and wrongful dismissal.[31][33] In the wake of this turmoil, Olympus announced plans to shed 2,700 jobs (seven percent of its workforce)[34] and shutter 40 percent of its 30 manufacturing plants by 2015.[35]

On 1 April 2011, Michael Woodford, 51, was named president and chief operating officer – the first ever foreigner to hold the position – replacing Kikukawa, who became chairman. Woodford, an Olympus veteran of 30 years, was previously executive managing director of Olympus Medical Systems Europa. Olympus appointed Woodford its CEO six months later, but the board suddenly removed him as chief executive two weeks into the job, while allowing him to retain his board seat.[36]

Woodford alleged that his removal was linked to several prior acquisitions he questioned, particularly the US$2.2 billion deal in 2008 to acquire British medical equipment maker Gyrus Group. Thomson Reuters reported that US$687 million was paid to a middle-man as a success fee – a sum equal to 31% of the purchase price, and which ranks as the highest ever M&A fee.[36] According to the Daily Telegraph, some of the sums paid out relating to the acquisition of a technology company ITX were also under examination.[28] Woodford noted that an article in Japanese financial magazine Facta in July prompted his suspicion of the transactions.[21] Reports also said the company acquired three other Japanese companies outside its core business, and recognised that the assets were worth US$721 million less than their acquisition value 12 months previously.[37]

Shareholders expressed concern after Olympus' share price nearly halved in value following the Woodford revelations, and asked for "prompt action".[26][36] Following his dismissal, Woodford passed on information to the British Serious Fraud Office, and requested police protection. He said the payments may have been linked to "forces behind" the Olympus board.[26] Japanese newspaper Sankei suggested that a total of US$1.5 billion in acquisition-related advisory payments could be linked to the Yakuza.[28]

The company responded on 19 October that "major differences had arisen between Mr. Woodford and other management regarding the direction and conduct of the company’s business". On the Gyrus acquisition, it also declared the Audit Board's view that "no dishonesty or illegality is found in the transaction itself, nor any breach of obligation to good management or any systematic errors by the directors recognised."[36] On 26 October, the company announced that to assuage shareholders' concerns, Kikukawa resigned as chairman; he was replaced by Shuichi Takayama. Olympus shares rebounded 23 percent.[37][38]

On 8 November 2011, the company admitted that the money had been used to cover losses on investments dating to the 1990s[27] and that company's accounting practice was "not appropriate", thus coming clean on "one of the biggest and longest-running loss-hiding arrangements in Japanese corporate history", according to the Wall Street Journal. The company laid the blame for the inappropriate accounting on ex-president Tsuyoshi Kikukawa, auditor Hideo Yamada, and executive VP Hisashi Mori.[30]

On 21 December 2011, Japanese authorities, including the Tokyo prosecutor's office, the Tokyo Metropolitan Police and the Japanese Securities and Exchange Surveillance Commission, raided the company's offices in Tokyo.[39]

In February 2012, seven Olympus executives were arrested by Japanese police and prosecutors. Former president Tsuyoshi Kikukawa, former executive vice president Hisashi Mori, and former auditor were taken into custody on suspicion of violating the Financial Instruments and Exchange Law, along with former bankers Akio Nakagawa and Nobumasa Yokoo and two others, suspected of having helped the board hide significant losses.[6]

On 25 September 2012, the company and Kikukawa, Yamada, and Mori pleaded guilty to collusion to submit false financial reports.[40]

Between 2006 and 2011, Olympus sold over $7 billion of medical devices in the United States market. Almost $600 million of that amount was used for various kickbacks including grants, bribes, gifts, and other forms of bribes according, to US Attorney Paul Fishman. On 1 March 2016, Olympus agreed to pay $646 million of fines to US authorities.[7]