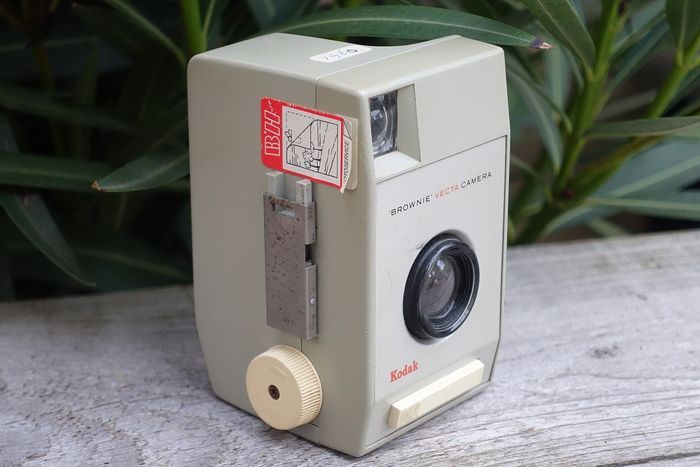 Introduced in 1963, the Vecta was a bold modern replacement for the Brownie 127 model II. However it was short lived as the vecta was discontinued in 1966, shortly after the (equally unsucsessful) 127 Model 3 was introduced.

This camera was designed by Kenneth Grange. It is a moulded grey plastic upright box. It features a “sculptured” finger recess to minimize camera shake. It has an optical direct vision finder and a bar shutter release.

The Vecta is a radical design, unlike anything else Kodak produced, and while it may look slightly ugly to modern eyes, it must have appeared very futuristic (and ugly!) in its day. The shaping is (apparently) ergonomically designed to make it easier to grip than more basic box. However, in practice, it can be quite cumbersome.

The Vecta takes 8 shots per roll like most of its predecessors but in a vertical format, rather like a modern 645 120 camera. One of the downsides of this is the winder knob “goes the wrong way” – turning anti-clockwise, even though it's on the right-hand side of the camera: I just kept getting it wrong. It does have multiple exposure prevention though.

In brief tests, the results look quite promising – OK it's a Brownie, so isn't going to be producing anything stunning, but the optics seem a little sharper than many of Kodak's offerings of the period

This post was created with information kindly contributed by onetwoseven.org.uk