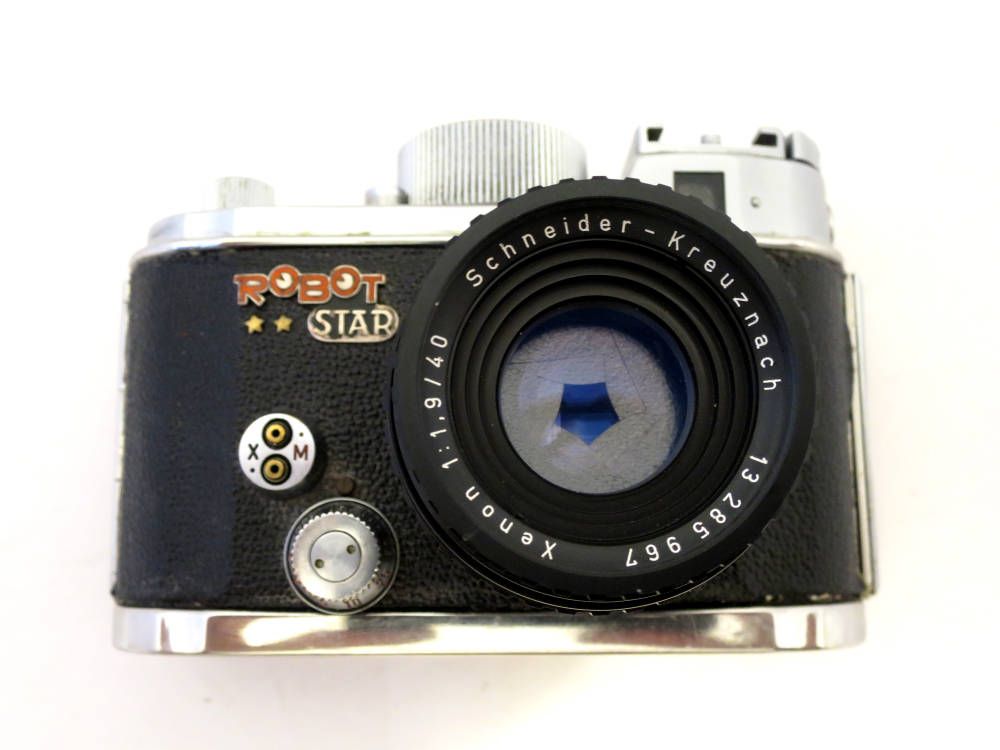 The Robots are a world apart. They are ultra-small, spring-wound 35mm film cameras with interchangeable lenses. To keep the cameras small, they chose the 24x24mm picture format. They are completely mechanical. They are designed for discreet, hyperfocal use, colour-points on the distance scale of each lens indicate the depth of the field according to the aperture set. Until the introduction of the Star II, they had an angle-viewer for more discretion. So the Robots played an important role in spying from the 30s to the 80s. There were silenced shutters available. And there were technical versions with big film canisters for the use in trafic radars.

When the Robot I appeared in 1934, there was no standard 35mm cartridge yet, so they had their own feeding cassette (T) and a winding cassette (N). The II in 1938 had some improvements. The I and the early II have 26×0.75mm screw-mount which was then changed to 26x1mm until the end of production. All lenses can be mounted on 26×1 cameras, but the 26×1 lenses cannot be mounted on 26×0.75 cameras.

The IIa in 1951 is the first to accept standard film cartridges, but still has no rewind. The Star introduced the rewind, but still needs the N cassette for winding. There was a cheap version of the Star without rewind and angle-viewer called Junior.

The Star II (Vollautomat, which isn't automatic at all) is a major redesign from the end of the 50s in 2 spring versions, the integrated 25 picture and the sticking out 50 picture version. It needs the NR cassette for winding. Both were renamed in the 60s as Star 25 and 50. They stayed in production until the 90s. The production ended with a limited edition collector's model, the Star Classic in 1996.

The Royal is a different line, bigger, with bayonet mount, burst mode and a rangefinder. The Royal II is a simplified version without burst mode and without a rangefinder. The III is the last and most sought-after mode lof the series. They were made in 3 formats (with the same exterior body), 24×36, 24×24 and 24×18 (rare). When buying lenses for these, please note that all lenses for the 36 model fit the others, but 24 model lenses will not properly work on 36 models. The lenses are not marked, the 36 versions have 2 cut-out slots at the back, the 24 version only one. The Recorder is a technical variant of the Royal without a viewfinder. Some Recorder models have a simplified mount.

The Robot cameras are very small cameras with interchangeable lenses. They are extremely robust and fast, which makes them quite heavy. Film loading is a bit complicated, but once you are used to it, it's fine. As proposed in the manual, it's not a bad idea to do some exercise with old film first. You have to lift the wind button, remove the wind cassette, dismount the wind cassette and insert the film into the spool. Then the casette is re-mounted around the film tip and re-inserted. The film cartridge goes into the other side. The wind button has to be engaged into the wind spool and the film tightened. Then close the film compartment a action the shutter twice. Done.

The cassette has a big advantage: if you open the camera with the film in it, you only lose 2 photos. There are feeding cassettes for bulk film. Handling is easy otherwise. With some training and short shutter speeds you can shoot up to 4 photos per second. A 36 exposure roll gives up to 55 photos. Spacing is very tight omn my cameras. I can sometimes have up to 64 photos from a 36 roll. The lenses are high quality lenses and designed for hyperfocal use. So the absence of a rangefinder is only a minor issue.

Although the finder is very small, I prefer the Star to the Star II. It's smaller, weighs less. The spring wind is easier to use for me. Both models are fine. With the 30mm lens (I love wider angles) it's a good and fast combination for street photography if you want a mechanical camera. Hyperfocal setting and modern film make it easy to guess exposure and distance and get beautiful photos.

The Robot cameras are fun to use. The lenses are very sharp. As they are small and rapid, they don't attract any attention. Last, but not least, they are mechanical beauties….

Where to Find a Robot Star

Find a Robot Star on Etsy

The Robot was made by Otto Berning & Co. in Schwelm, Westphalia. This internationally much advertised steel-camera designed by Heinz Kilfitt had two remarkable features, first a modern type of film advance with double exposure lock and coupled shutter cocking, and second a multi-speed kind of rotating shutter from Gauthier, made completely of metal.

Two versions of the Robot were launched in 1935: The Robot 1 and Robot 2, the Robot 1 with this feature: After release for one exposure the shutter was locked until the shutter was cocked and the film advanced with it. Both versions had the following features: The film had to be loaded into one "K-cassette". After having made the 50 possible 24x24mm exposures the film was coiled in a second K-cassette.

The Robot shutter was an own category. The cameras were equipped with fine Zeiss or Schneider lenses. The Robot 2's special feature was the most significant for the whole camera series: a strong spring motor for film advance, made by the Black Forest clock maker Baeuerle & Söhne. That allowed to make a series of images in a few seconds. Maybe this feature plus the camera's robust stainless steel body made it one of the prefered cameras of the German army. Especially the German Luftwaffe owned special versions of it with more robust spring motor and a 75mm Xenar lens. The prewar models were equipped with a hybrid finder.

In 1939 the design was changed, with the finder inside the camera top. This design is called the Robot II.

The Robot IIa was launched in 1951. It was modified for use with standard 35mm film cartridges. By 1962, the two main models were the Robot Star II and the Robot Royal.

The Robot Star II, taking 24×24mm exposures, has an all-metal Rotor shutter (1/4 to 1/500), a direct vision viewfinder, and a screw mount for interchangeable lenses by Schneider. The standard lens is a Schneider Xenon 40mm f1.9.

Also available was the Robot Star II/50, with a double spring motor for 50 exposures and a Xenar 38mm f2.8 lens.

The Robot Royal has "Kinographic" capability of 4 or 5 exposures per second. It has a coupled rangefinder, and a choice of eight bayonet-mount interchangeable lenses.

Robot cameras were added to professional equipment, for example to microscopes, endoscopes, and ophtalmologic eye-control instruments. In medicine and other sciences the reliable cameras were popular because of the spring motor. Finally the legendary sturdiness of the Robots opened them the market of car-speed control cameras. Example: A Robot Motorrecorder 36 DAP was built into mobile eso µP 80 car-speed control instruments of the police[1].

The Robot I has no prefix to the serial number, others are prefixed with a letter as follows: One thought on “Robot Star, a Square Format 35mm Camera, how Strange”