The Pentax Electro Spotmatic was the world's first 35mm (aff) SLR with a fully electronic shutter system. It was released in 1971 and only sold in Japan. The circuitry was under constant revision during the year of its release which arguably made the camera a prototype, which was evident due to reliability issues.

The Electro is one of the hardest-to-find Pentax bodies in working condition. The photographer can choose between manual or automatic shutter mode. Speeds from 1/1000 to 1/60, longer times through automatic mode. Button for battery check to the left of prism house. When the shutter speed was set on automatic, it used a ‘stepless' shutter. The Pentax memory device computes and delivers an infinite number of exposures between 8 and 1/1000 second – automatically. If 1/555 second will give you the right exposure, that is what will be programmed.

Where to Find a Pentax (Electro) Spotmatic

Link to Pentax Spotmatic on Etsy

Link to Pentax Spotmatic on Amazon.co.uk

The Pentax Spotmatic refers to a family of 35mm single-lens reflex cameras manufactured by the Asahi Optical Co. Ltd., later known as Pentax Corporation, between 1964 and 1976.

All Pentax Spotmatics used the M42 screw-thread lens mount which was developed before WWII by Zeiss and Praktica. Asahi Optical used the name Takumar for their lenses. These were high-quality, progressively improved lenses, later versions of which featured multi-coating and were called Super Multi Coated Takumars.

The camera allowed one to focus the lens at maximum aperture with a bright viewfinder image. After focusing, a switch on the side of the lens mount stopped the lens down and switched on the metering which the camera displayed with a needle located on the side of the viewfinder. The use of stop-down light metering was at the time revolutionary, but it limited the capability of the lightmeter, especially in low light situations. Later models Spotmatic F, Electro Spotmatic, ES, and ESII were capable of open-aperture metering when used with Super Multi Coated (S-M-C) Takumar lenses with an aperture coupling prong in the lens mount.

The original 1964 Spotmatic was one of the first SLRs on the market to offer a through-the-lens (TTL) exposure metering system. The camera was presented as a prototype at photokina 1960, and was originally designed to use spot metering. Shortly before production Asahi decided that spot metering would be too difficult to use, and so the metering system was altered to use center-weighted average metering. The change took place too close to production to change the name, and so Spotmatic stuck.[1][2][3][4] The camera had a mechanical shutter with speed range from 1000 to 1 and Bulb. The lightmeter is activated by a lever on the side of the camera, which also stopped down the lens. Mercury battery (1.35 V Mallory RM640) was used to power the light metering system; however due to the way the circuit is designed, silver oxide batteries can be used instead.[5] 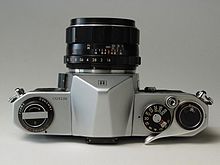 The model range includes the original Spotmatic (SP), which had an accessory "cold" shoe for flash

The Spotmatic II (SPII) heralded the arrival of the SMC lenses. Among some improvements were better metering system (Max ASA was increased to 3200) and film transport. A hot shoe for flash was added and the synchronization (FP or X) was placed on a dial switch located below the rewind crank. 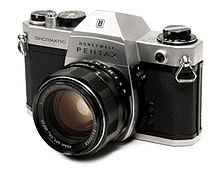 Spotmatic IIa was made exclusively for the American market. It was made to couple with the Honeywell Strobonar electronic flashes using an electronic eye that was located at the top-left of the camera. 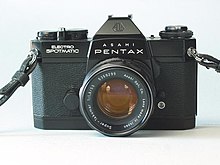 In 1971 the Electro-Spotmatic was the first aperture-priority, electronic, automatic SLR but was only sold in Japan.[6] It success was followed by the ES sold internationally from 1972. The ES had standardized and improved circuitry that addressed reliability issues in the original version.[7] Two years later it was followed by the ES II. Special models could be special ordered with accessories such as Motor Drive, Data Back, etc.

In 1973 the Spotmatic F joined the line. This camera, together with a revamped line of Super Multi Coated (S-M-C) Takumar had the capability of metering without stopping the lens down.

The Pentax Spotmatic chassis was the basis for the Pentax K2, KX, KM and K1000 models with bayonet mount.

Noted users of the Pentax Spotmatic include the American poet and photographer Ira Cohen.[8] Ringo Starr, drummer for The Beatles, used an Asahi Spotmatic in the movie A Hard Day’s Night.[9]

This post was created with information kindly contributed by Cameras Downunder

View As
GridList
Sort By

LEADING THE WAY IN UK MANUFACTURING