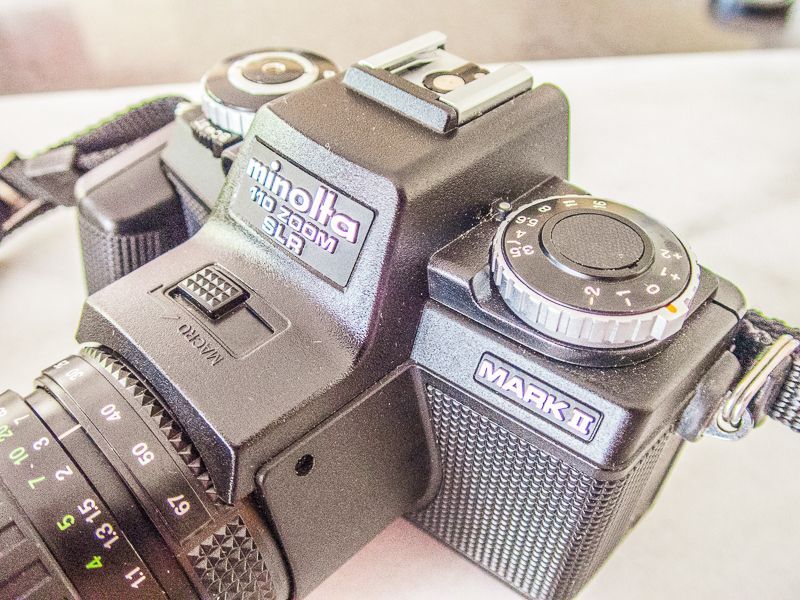 An extract from the original manual reads:

Your Minolta 110 Zoom Mark II combines the simple loading, compactsize, and ease of operation of the 110 pocket format with features, optical quality, and capabilities found only in the finest electronic automatic 35mm cameras. Simply drop in a film cartridge, there's no need to set film speed, compose your subject, and the camera's TTL exposure system gives the precise exposure automatically. The 2.7X Minolta Zoom lens with its macro capability gives you the widest range of focal lengths of any 110 camera available today. This extreme flexibility lies always ready at your fingertips, there is never a need to change lenses.

While the Minolta 110 Zoom Mark II is remarkably easy to use, its many creative features and controls such as, LED readout of shutter speeds, full lens aperture control, eyepiece shutter and correction, and a full 2 stop I auto-exposure adjustment allows virtually unlimited creative control of the camera.

What’s in the Box?

The camera came only with a strap and a very old bag (it went in the bin). Batteries were fitted so I was able to see that it was working and ready for action. Just needed a 110 Colour Film which I bought from Analogue Wonderland. It loaded easily as all 110 cameras do in my experience.

Is it in Good Condition?

The camera appears to be in great condition. I went through the controls and spent a little time looking up what setting s I could use, etc. The only feature I believe is not working is the self-timer – not something that I am likely to use. The controls are quite chunky for the size of the camera – making it easy to operate and get used to. The only strange thing is that the film wind-on is at the bottom of the camera. I have not had a camera that has operated in that way before.

I am very pleased with the results I obtained. They have every characteristic of a film/analogue camera. I sent the film to

Minolta made two attempts to offer SLR cameras for the 110 pocket film format. One was the unconventional camera pictured on the right, the Minolta 110 Zoom SLR, was released in 1976. It is a aperture priority based camera with no manual exposure control.

It has a built-in 1:4.5/25-50mm zoom lens, with a 40.5mm filter thread. The aperture selector was not part of the lens. It was placed around the exposure-meter-eye instead. The meter is activated by pressing the shutter release button half way, it controlled just the shutter speed. The shutter has a range of 10 sec. to 1/1000 of a sec. A bulb mode is also available and the camera will function in the bulb mode without batteries. The shutter release button has a cable release socket and is also connected to a lock switch to prevent accidental exposure. A hot shoe for a flash was on top of the camera, which has a flash sync speed of 1/150s. Rotate the exposure dial to the X setting to use.

The viewfinder has a central microprism focusing spot. There are left and right indicators in the finder for the exposure meter. Adjust the aperture ring towards the arrows until the indicators do not light for correct exposure. Exposure compensation is available that can be change up to two EV stops.

The film transport uses a film advance lever located on the base of the camera that is operated by the right hand thumb. There is a tripod socket, but instead of being on the bottom, it is on the left side of the body. Power comes from 2 SR44 silver oxide batteries. A battery check function can be used by pressing the red button by the shutter.

The shutter has speeds of 1/4 to 1/1000 second plus B, as well as a flash sync of 1/125 second. A self-timer has a 10 second delay and has a LED indicator. The exposure meter is a TTL based center-weighted system with a range from EV 5.6 to EV 17 (at ASA 100). Exposure compensation can also be adjusted up to two EV stops. The viewfinder has diopter correction of -1.1 to 0.8. The finder screen has a split image spot for focusing and has 5 LED indicators for shutter speed along with over, and under exposure.

2 thoughts on “Minolta 110 SLR MkII, Check out this Small and Easy to Use Film Classic”